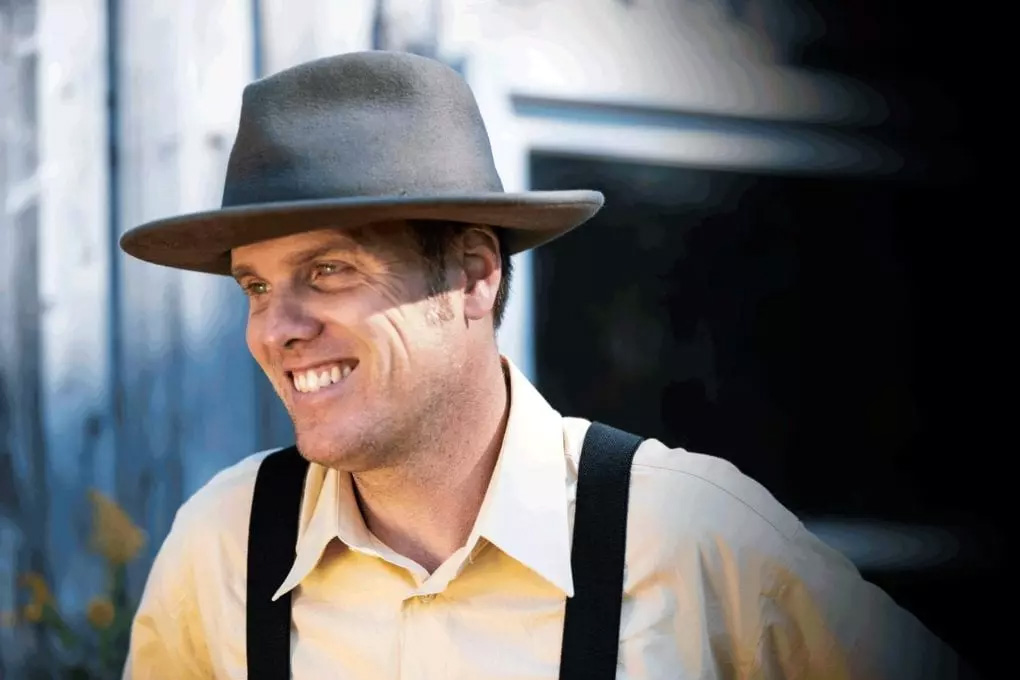 
Dave Gunning is best defined as a master craftsman. Over the course of 23 years and 11 earlier albums, the Nova Scotian folk singer/songwriter has diligently sharpened his skills, developing into a poetic storyteller and emotionally convincing singer with few equals.

The fruits of those labours are now vividly on display in his latest collection of songs, Up Against The Sky. The relaxed and intimate feel of the record reflects its method of creation. “I focused a lot on tones and the vibe, rather than strategic parts on this one. Many of these tunes were sung and played at the same time, and that prevented me from being able to go back and edit, forcing a little more honesty.”

The sessions in Dave’s home studio were co-produced by Gunning and Jamie Robinson. Gunning contributed the bulk of the instrumentation, including all the bass parts and even drums on every song but one. Musical guests include his close musical comrade J.P. Cormier on fiddle on “Celebrate The Crop,” and Andrew Alcorn on horns on “In The Time I Was Away”, while the Atlantic String Machine added subtle yet atmospheric strings on four tracks.

Eight of the ten songs here are co-writes, with Dave’s writing partners including Jamie Robinson, Ray Stewart, Thom Swift, Paul McKenna, and Mark Lang. The two solo compositions are “The Loyal Fisherman,” an epic ballad of love and betrayal, and “Celebrate The Crop,” a lovely fiddle-fuelled celebration of the simple pleasures of the farming life “everyone’s coming over and we’ll share all that we’ve got.”

The first single taken from the album is “In The Time I Was Away,” a gently reflective look at the changes wrought by absence. “When you’re away from home for large chunks of time on a regular basis you miss things that have happened. Sometimes they’re big things and sometimes they’re the little things,” says Dave. Written with Mark Lang, it is punctuated by a horns accompaniment that shows Gunning’s ability to add unconventional yet effective musical touches to his material.

There’s also a philosophical feel to “All That’s Yet To Come,” the opening track on Up Against The Sky, and another highlight of an album devoid of lowlights. It faces the future with an optimistic tone – “I’m proud of the past and all that’s yet to come.”

Gunning explains that this is one of a number of songs influenced by a local Pictou County issue that has taken a great deal of his time and energy in recent years. He is a very active member of a group opposed to the release of 70-90 million litres of treated effluent, per day from an older style bleached kraft pulp mill. The proposal is threatening the Northumberland Strait fishery and a Legislated commitment made to the Pictou Landing First Nation community to end what even the Premier of Nova Scotia has called “Environmental Racism.”

Another song inspired by this situation is “Wish I Was Wrong,” a mournful yet defiant tune that reaffirms Gunning’s ability to pen potent protest songs. “We want a safe harbour, we want a clean shore” he declares, while playing banjo in a tribute to a key inspiration, Pete Seeger.

Another politically-tinged tune that has had a major impact is “Sing It Louder,” from Gunning’s previous album, 2015’s acclaimed Lift. It was the most played song on folk radio in the US for the month of May 2016, and Dave says “I think that it may have resonated with people because it was released during the US election and it’s a call to action song.”

Last year, Dave Gunning and J.P. Cormier released a duo album, Two, one recently nominated for a 2019 East Coast Music Award. “It was just two guitars and two voices. We  have played together on and off for 20 years so it is comfortable for us,” explains Dave.

Along with richly-deserved peer respect, Dave Gunning has earned a shelf full of music industry honours. That tally currently stands at eight East Coast Music Awards and two Canadian Folk Music Awards, plus a 2012 Juno Award nomination in the Roots & Traditional Solo Album of the Year category for his album … a tribute to John Allan Cameron, a compelling homage to another of Dave’s Maritime musical heroes.

His songwriting skill has also been internationally recognized, with tunes scoring victories and high placings in major international songwriting competitions. As a fervent hockey fan, Dave was also thrilled to win the CBC’s hotly-contested Hockey Night In Canada Song Quest in 2014 with “A Game Goin’ On”, a co-write with David Francey. Gunning has also remained in demand as a producer working with many artists.

For now, though, his concentrated focus is on Up Against The Sky. The record, and all that’s yet to come from this compelling artist, can be looked forward to with great anticipation.